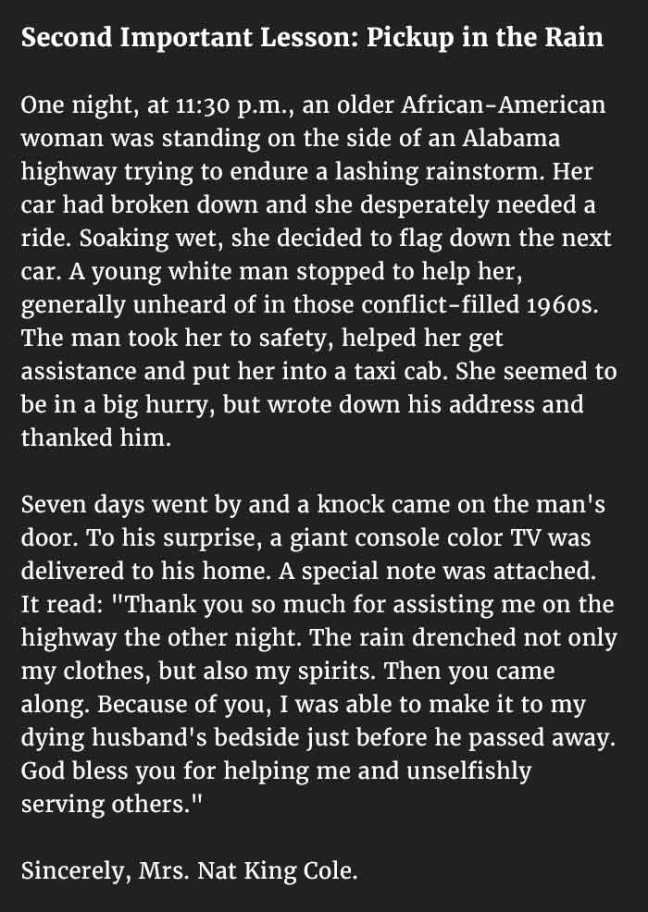 So political lesson number two as you read above is a tough one for a guy like me who is a product of the 80’s. Why you ask? Well, lets just say we 80’s kids were raised in fear of everything. I mean, we had NBC doing public service announcements warning us about the dangers of the world followed by that little jingle, “The more you know…” And then GI Joe indoctrinated us that “knowing was half the battle.” The horror movie genre was in it’s prime letting us know that you don’t go to summer camp and you sure as heck don’t help anyone on the side of the road….especially a very attractive woman. It’s like we constantly had Admiral Ackbar from Star Wars telling us, “It’s a Trap!” Moving into the 90’s, the movie Something about Mary just confirmed our parents warning, “Don’t pick up Hitch Hikers,” when Ben Stiller’s character picks ups a homicidal maniac with a duffle bag of dead body parts and keeps talking about making an exercise video for 7 minute abs! (Not eight…..SEVEN!!!!) It is amazing we even dare to go outside. So I repeat….Lesson number two is a tough one. But I will tell you the time I learned it. I was in line at Chipotle in Portland a few years ago. A guy walks up to me in line and asks me for money for a burrito. He says, “Do you have some change you can spare? I just got out of jail and the only thing I have been craving is a Chipotle burrito!” I too have had those cravings…..and I have never been to jail. Who would have thought a guy who just got out of jail and I could bond over the idea of Chipotle? And he did not want the money for drugs or alcohol. He just wanted to eat. So I bought him a burrito. We need to stop focusing on our differences. A failure our schools keep perpetuating in my opinon. And we need to focus on our similarities. We need to help others not because of our differences, but because of our similarities. The person with a broken down car who needs help. The tourist who needs directions. The person who needs help loading his truck at the home improvement store. The guy who had a rough month and needs a burrito. That could be anyone one of us. We just need to offer help to those in need. Big or small. And I don’t mean the government offering help. WE need to. That is lesson number two