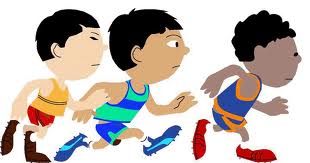 So my nephew Payton asked me to sponsor him for a Jogathon to support the school’s PTA a few weeks back. He is an 8th grader down in Corvallis. I never turn my nephews down for any request. So I asked him how many laps he planned on doing and he said, “Probably eight.” Well, I believe in making sure my nephews push themselves a little harder, so I told him I would pay $5 per lap as long as he did ten. If he did less, I would not pay. He understood and agreed. Well over dinner a week ago he tells me that he was not able to do the ten laps and that is why he did not request the check from me. I asked, “How many laps did you do?” He said, “Nine and a half.” “Why did you not do ten?” “I ran out of time.” “They timed you? And they wouldn’t even let you finish the lap?” He said “No, we had to stop.” I was shocked as I never thought the event would be timed. Now think about this for a moment. This is a charitable event. Jogging really isn’t anything worth paying for. But it teaches these young children the importance of working for a reward. Things must be earned and should not just be given. Now I understand somethings need rules, but at the same time, people are choosing to support the PTA. That being said, why would they have a time limit? Or why not at least let them finish the final lap they were on? I mean think of how many dollars were not paid because the racers had to stop mid lap. The primary goal is to raise money and that should be the focus of this event. I was dumbfounded. I told Payton I would be happy to write him the check for fifty dollars and that I could not believe how short sighted his school was for this event. He said, “Thanks Beej (he calls me Beej), but they stopped taking money on Friday.” I told him, “Gooch (I call him Gooch), you give them the check on Monday. If the school refuses to take the check, then evidently they do not want it nor deserve it.” So I texted Payton a few days after to see if he was able to give them the check. The school refused it. The school refused to take a donation to support the PTA. Well I refuse to work with any charity that turns down donations. So I told Gooch we need to pick out a charity that appreciates our donation. He suggested “Make a Wish.” So this week we will be making a $50 donation so a family can do something magical with a very ill child. And while we are doing this, he will be learning the importance of hard work. The need to be giving and charitable to others. And most importantly, understand the value of money and that people who cannot appreciate it, do not deserve it. We have a choice in charities. It is a shame we don’t have a choice in schools.
Please share my page and support me for your representative of the First Congressional District of Oregon. http://www.heinrichfororegon.org